We Meet Again! The Proceedings

On Thursday 31 August 2017, Oxford Climate Policy, on behalf of the European Capacity Building Initiative (ecbi) and the Oxford University Natural History Museum, hosted a special event for the participants of the ecbi Oxford Seminar.

The Natural History Museum was the venue of a historic evolution debate on 30 June 1860, seven months after the publication of Charles Darwin's On the Origin of Species, involving Samuel Wilberforce, the then Bishop of Oxford, and Thomas Henry Huxley, a biologist who defended Darwin's theory of evolution and had earned the epithet of “Darwin’s bulldog”.

The event, named "We Meet Again!" in reference to the historic debate, brought together the current Bishop of Oxford, the Rt. Revd. Dr Steven Croft, and Professor Sir Brian Hoskins, Director of the Grantham Institute for Climate Change at Imperial College, London, and Professor of Meteorology at Reading University, to discuss the question: "What can we do to support the fight against global warming in the current climate?"

The transcript of the proceedings is now available for downloading.

• Putting Politics Aside, Can We All Come Together to Fight Climate Change? 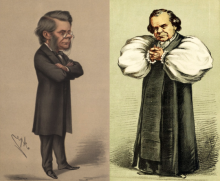