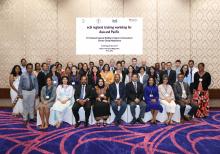 This listing shows the documents associated with your chosen event.

The 2017 Asia Regional Training Workshop took place on 6 & 7 September 2017 in Negombo, Sri Lanka. The workshop, hosted by Janathakshan, was attended by over 30 “new” negotiators and national policymakers from countries in the region, appointed by national focal points to the UN Framework Convention on Climate Change (UNFCCC). In addition to training on key thematic areas of the UNFCCC negotiations and on the ongoing negotiations on the ongoing negotiations on the rules to implement the Paris Agreement, participants engaged in mock “negotiations” and formulating of group positions during the two days. Speaking at the opening of the event, Anju Sharma, head of the ecbi Publications and Policy Analysis Unit, noted that ecbi training workshops not only emphasise knowledge-sharing, but also the importance of social engagement to help negotiators step across defined national boundaries and positions, and work cooperatively to achieve common – and critical – goals